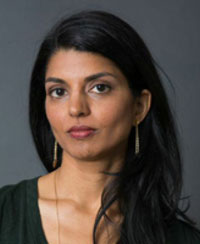 In October of 2000, women around the world successfully championed the Women, Peace and Security (WPS) agenda-and the UN listened. Increasingly, the concept of a Feminst Foreign Policy is taking root at the domestic level, beginning with such states as Sweden, the UK, and Canada. Today, women are actively questioning assumptions about what security means. They are challenging existing power structures with new ideas and actions to shape international peace and security policies. How does the increased participation of women in decision-making – a hallmark of Women, Peace and Security – impact security thinking and doing? Unlike any other foreign policy agenda, WPS originated from a global constituency of non-state actors, with a focus on non-violent and human-rights based approaches, and, most importantly, with an explicit acknowledgement of the intrinsic value of gender equality to lasting peace.

Sahana Dharmapuri is the Director of the Our Secure Future program of One Earth Future. From 2006-2016 she was an independent gender advisor on gender, peace, and security issues to USAID, NATO, The Swedish Armed Forces, the United States Institute for Peace, International Peace Institute, and other international development organizations. Most recently, Ms. Dharmapuri was a writer-residence at the Carey Institute for Global Good (Winter 2016) where she completed her first book, Women, Peace & Security: 10 Things You Should Know. She was appointed a Fellow at the Carr Center for Human Rights Policy at the Harvard Kennedy School of Government (2011-2013) and she was an Investing in Women in Development Fellow at the United States Agency for International Development (2003-2005). She has published widely on women, peace and security issues including by Ms. Magazine, CNN, Christian Science Monitor, The Fletcher Security Review, Hedaya and The Center for Global Counter-Terrorism, Women’s E-News, Human Rights Quarterly, The Global Responsibility to Protect Journal, The Global Observatory, The Alliance for Peacebuilding Online Journal, the Louisiana Literature Review, The US Naval War College’s Women, Peace and Security monograph series, and Parameters: The Senior Professional Journal of the US Army. She received two MA degree from the University of Chicago in 1995.