« A Warrior’s Return: Societal, Familial and Personal Recovery
Facing Our Fallacies: An exploration of what happens when good people allow fallacious thinking to bias their reasoning, coarsen their conversations, and otherwise deprive them of good humor »

Exorcisms, Evil Spirits and the Supernatural 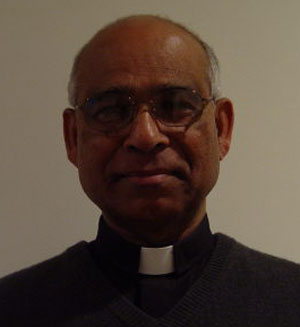 Father Herman will share his personal experience in conducting exorcisms in India, working with people of demonic oppression and haunted houses in the United States.

Fr. Herman, B.A., History, Philosophy, and Theology, was born and raised in India, where he undertook nine years of seminary studies at Sacred Heart College in Madras, and the University of Madurai, India. Fr. Herman was a Pastor in India for 15 years, where he was also an Exorcist for seven years.  He has been in America for 18 years and is an American citizen, and has been part of the Archdiocese of Denver since he arrived here from India.  In the past, Fr. Herman was an assistant pastor at St. Joseph’s, (Fort Collins) St. Thomas More (Centennial) Good Shepherd (Denver) and is currently the Pastor at St. Martin De Porres Catholic Church in Boulder, where he has been for 7 years. Fr. Herman has been instrumental in helping many people be healed of demonic oppression. The Archdiocese of Denver, as well as several Protestant ministers, send many people from throughout the state to him for healing of demonic oppression.

Fr. Herman’s comments on demonic possession have been published in Crisis magazine, (November 2003 issue).  He writes many articles regarding demonic possession, witchcraft, and spiritualism for the parish bulletin.  He has taught Catholic mothers in a Catholic school in Denver, has taught in a seminary and in Golden, CO, and taught mothers who home school their children. He is the spiritual assistant of the Carmelites, a Catholic Religious Order of men and women who, inspired by the spirit of the Prophet Elijah and the Blessed Virgin Mary, seek to live a life of allegiance to Jesus Christ through contemplation, fraternity, and service in the midst of the people.