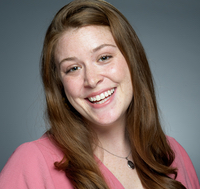 Support Interface! Donate $10 to Register…
(Click the “Add to Cart” button to register)

“LIV is a 39 minute film featuring sisters Tess and Liv, who from a young age are inseparable. Liv is a young girl, growing up with relentless pressures of social media, teen depression and, often, suicidal thoughts. Through fearless storytelling, LIV reveals the realities of stigma, the struggles of mental health, and the aftermath for the survivors left behind in a suicide.

To ensure LIV was created in a safe and effective manner, the filmmakers worked with a team of therapists to craft the story. In addition, the film was vetted by the leading team at the Children’s Hospital Colorado Pediatric Mental Health Institute to ensure the content was accurate and safe, and in no way glorified this issue. The film has been approved for youth ages 14 and up by the team at the Children’s Hospital Colorado.

The film will be followed by a presentation by Tess on the impact of the film, and how The LIV Project is bringing awarenss to teen suicide through fearless conversation and creativity.

Tess Kunik is a Colorado born and Philadelphia based Theatre Artist, Designer, and Teaching Artist. She attended the University of the Arts where she graduated in 2013 with a BFA in Theatre Arts. From 2015-2020 she served as teaching artist, designer, and stage manager, for a non-profit Theatre Education Organization and later brought theatre programming to schools in the Greater Philadelphia Area as their Education and Outreach Manager.

When her 19 year old sister, Liv, died by suicide in January 2019, Tess collaborated with filmmakers Paula Dupre Pesmen and Al Hicks to create a short documentary film. Tess currently serves as the Chief Impact Officer for The LIV Project. She is passionate about collaboration and storytelling and its power to educate, inspire, and start conversations. She is dedicated to cultivating confidence in those who wish to tell their own stories. Here’s to Sweet Liv, Tess’ most beloved collaborator and inspiration.