« The Roots of Violence and Force in the World Today: Where Does the UN Fit In?
Anger, Compassion and Healing »

Religion, Politics, and the Crisis in the Middle East 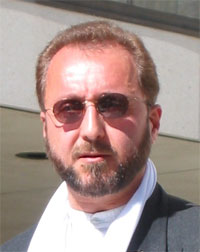 Imam Kazerooni will address his understanding of the most recent current events concerning Iraq and the middle east. Participants are invited to write down specific questions to be addressed in the second half of the presentation.

Imam Ibrahim Kazerooni, was born in Al-Najaf, Iraq, into a religious family and began his theological studies in that city when he was very young. As a Shiite Islamic priest, or imam, he emerged as an Iraqi dissident and was repeatedly imprisoned and tortured for his beliefs by the Baathist regime under Saddam Hussein. Fleeing the country in 1974 at the age of 15, many of his friends and relatives left behind were killed, including his brother, uncle and cousin.

He spent the next few years going around the Middle East trying to find a home, and early in 1977 ended up in London, where he went to university and earned degrees in Mining and Petroleum Engineering and a MBA in Management.

He has traveled to many countries on lecture tours and currently resides in Denver, where he lives within walking distance of the Islamic Center and where he functions as Imam for the Muslim community. His library and study in his home are full of books, wall to wall, floor to ceiling, most in Arabic.

He is a board member for several local municipal agencies. He was appointed as a Muslim cleric to the staff of St. John’s Episcopal Cathedral and serves as the Director of the Abrahamic Initiative.