« Waking Up Together: Social Transformation and Feminine Values
Forgiveness: The Ultimate Revenge »

Making Peace in the Family 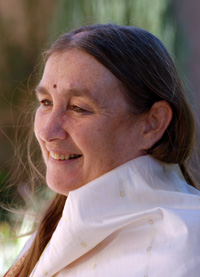 We long for peace on earth yet often our most intimate relationships seem like war zones. How can we develop genuine community and communication at a family level?

Alakananda Ma is a revealer of the Divine Mother, spiritual teacher, Ayurvedic practitioner, flower essence maker and storyteller. She is also an accomplished writer with many published articles.Alakananda Devi, affectionately known as Ma, was born in 1951 in Melton Mowbray, U.K. and was raised in both the Jewish and Christian faiths. In 1976, Alakananda graduated as a physician from St. Bartholomew’s Hospital Medical College, London University. She then spent five years in Catholic convents and Abbeys, making her novitiate in Holy Cross Cistercian Abbey, England, before traveling to India to study with Father Bede Griffiths at Shantivanam. There she met Sadananda who introduced her to Raghudas Maharaj, the hidden master who was to be her guru. She also met Dr. Vasant Lad, her Ayurveda teacher, in Poona in 1980. Through her studies with Dr. Lad, Alakananda became one of the first western physicians to take up Ayurveda, and became one of Dr. Lad’s first students.

Alakananda’s subsequent adventures during the five years on pilgrimage in India are described in her book Pilgrimage to the Mother. During this time she stayed at many temples, ashrams and shrines, studying yoga, Hinduism, Sufism, Jainism, Ayurveda, Homatherapy and Hindi. Alakananda studied devotional singing with Sadananda and lived as a wandering renunciant or sadhvi. At one point she ran an experimental therapeutic community for psychotic Western youth at Om Yeshu Niketan in Goa, and served as “Physician to the Hippies”. At the conclusion of pilgrimage, she was told by Pujya Ganguthai, a kanya disciple of Upasani Maharaj, and by Kamalabai, the chief disciple of Raghudas Maharaj, “Go to the United States and there make an ashram for Raghudas Maharaj”.

Arriving in the United States with Sadananda, eighty dollars in their pockets and two Indian musical instruments, they traveled to Boulder, Colorado, to found their first ashram in a tipi. Alakananda practiced homatherapy and learned astrology. Moving to Tucson Arizona in 1986, they re-started Alandi Ashram in a two-room, back-alley apartment.

In August of 1990 she and Sadananda restarted Alandi Ashram in its current location in Boulder, Colorado. In 1997 the Ashram grew into a residential community, having nine resident members and an additional three full time student participants. In 1998 they began to develop Alandi Ayurvedic Gurukula.

Alakananda Devi is the author of Pilgrimage to the Mother: a woman’s journey to the source of the Ganges,The Rainbow Bridge: prophetic encounters with the mother’s path of unity; and From My Heart to Yours, a volume of original devotional poetry. Her future book plans include, Ayurveda for Elders and Ayruveda for Couples.

“Alakananda Ma is a spiritual teacher of the highest order. Trained in several spiritual disciplines, she is devoted to each of them in full fervor. Holding a medical degree, she is also trained in Ayurvedic medicine and nutrition. Most of all, she is a spiritual teacher who opens hearts, guides her disciples and promotes blessings for their lives. She received recognition, initiation and empowerment in those traditions and lineages and will inspire the people whom she serves. I give this endorsement after nearly a decade of having worked with her and been inspired by her.” –Rabbi Zalman Schachter-Shalomi, Author, From Age-ing to Sage-ing

All information about Alakananda Ma, Alandi Gurukula School, PDF’s for articles, Ma’s blog, Books and CD’s can be found on the website: www.alandiashram.org

2 thoughts on “Making Peace in the Family”