Living in the Sacred: A Look at the Culture and Spirituality of the Arapahos 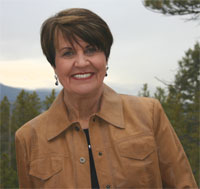 The Arapahos, one of the Plains Indians, live among the spirits in a sacred world. Margaret will discuss the way in which the sacred permeates all aspects of life and the way in which Arapahos strive in their daily lives to remain connected to the spiritual dimension.

Margaret Coel is the author of ten mystery novels set among the Arapahos on Wyoming’s Wind River Reservation. The novels feature two sleuths: Jesuit priest Father John O?Malley and Arapaho attorney Vicky Holden. WIFE OF MOON appeared in 2004, and EYE OF THE WOLF will be published in September, 2005.

The novels have received wide recognition. They have been on the bestseller lists of numerous newspapers, including the New York Times, the Los Angeles Times, the Denver Post and the Rocky Mountain News. THE SPIRIT WOMAN won both the Colorado Book Award and the Willa Cather Award for Best Novel  of the West.  It was also a finalist for the Western Writers of America prestigious Spur Award for Best Novel. THE SHADOW DANCER was also a winner of the Colorado Book Award.

Margaret is the author of numerous short stories, published in anthologies, and articles which have appeared in such publications as American Heritage and The New York times. She has also written four non-fiction books on the history of Colorado, including CHIEF LEFT HAND. Published by the University of Oklahoma Press in 1981, this biography of an Arapaho chief and history of the Arapahos in Colorado has never gone out of print. The Colorado Historical Society recently included CHIEF LEFT HAND among the best 100 books on Colorado history.

Margaret is a fourth-generation Coloradan who grew up in Denver.  She currently resides in Boulder where she writes from a study that looks out over the Rocky Mountains.  A herd of deer graze on the hill outside her window and from time to time, a mountain lion will wander past. “Everyday,” she says, “I drink in the West.”.