« Nature’s Choice: What Science Reveals About the Biological Origins of Sexual Orientation
The Unifying Golden Thread: The Interface of Science & Spirituality »

Jewish Teachings on the Afterlife 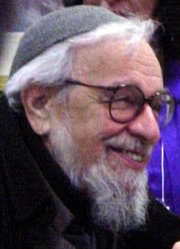 Traditional teachings about the afterlife have been called eschatology. I have offered the equation, eschatology equals the psychology of becoming. I will outline the after death stages according to mystical Jewish tradition [similarities to bardo states will become apparent] and will show how spiritual work while still in the body can anticipate and prepare for a better afterlife.

Eschatology equals Pyschology
Pre-death
At the moment of death, The River of Light again and again
Before burial
After Burial -The pangs of the grave – need to dis-identify with body The River Of Light
The Catapult – get rid of mind dust and mud
The Laundry – Purgatory
Lower Paradise
Upper Paradise
Reincarnation
Final absorption in the “Body of the King”
Customs and help Confession
Hevrah Kadisha -washing and shrouding the body
Burial Kaddish – Yahrtzeit

Rabbi Zalman Schachter-Shalomi, is widely recognized as perhaps the most important Jewish spiritual teacher of the second half of the twentieth century. Reb Zalman as he is affectionately called, has been at the forefront of pioneering Jewish spiritual renewal. Through prayer and meditation, counseling and mentoring, movement, song, storytelling and philosophical discourses, he shares the central teachings of Hasidism and Kabbalah in a manner which is, at once authentic, contemporary and compelling. The heart quality of his teaching leaves a profound effect on those fortunate enough to become his students.

His spiritual formation has been from Hassidic and Kabbalistic Masters. He is committed to a post-triumphalist, ecumenical and Gaian approach. His belief in the universality of spiritual truth has led him to also study with Sufi masters, Hindu and Buddhists teachers, Native American elders, Catholic monks, and humanistic and transpersonal psychologists.

His extensive breadth of knowledge spans the worlds of Kabbalah and computers, bridging the disciplines of linguistics and metaphysics and the techniques of the psycho-physical and the intuitive.

He is the founder of the Spiritual Eldering Institute in Boulder, Colorado, which sponsors nondenominational workshops to help people grow into elderhood. He is also co-founder of the havurah movement and the founder of B’nai Or Religious Fellowship, Aleph: Alliance for Jewish Renewal, Aleph Rabbinic Seminary, and The Yesod Foundation.

Reb Zalman was ordained by Lubavitch Yeshivah Brooklyn in 1947 and received his M.A. from Boston University in Pastoral Psychology and his D.H.L. (Doctor of Hebrew Letters) in 1968 from Hebrew Union College. He has served as teacher and school principal, congregational rabbi, campus chaplain, Professor of Near Eastern and Judaic Studies and is Professor Emeritus of Religion at Temple University, and former World Wisdom Chair and Professor of Religion at Naropa University.

Born Zalman Schachter in 1924 in Poland, the rabbi-to-be soon moved with his family to Vienna, where he attended both a traditional yeshiva and a socialist-Zionist high school. When the Nazis threatened, the Schachters went to Antwerp; when Belgium came under German attack, the family began an odyssey. Detained in a camp in Vichy France, they escaped to Africa, then to the West Indies, and finally to NewYork in 1941.

He completed his rabbinical studies in the Yeshiva of the Chabad/Lubavitch movement and received ordination from the late Lubavitcher Rabbi. After serving the Lubavitch community for a number of years he came to the conclusion that rather than recreating the destroyed world of Eastern European Jewry, the true need of our time was to bring together the best of that world with the humanist insights of contemporary society. He also understood the need to create a Judaism which could speak to the thousands of young Jews who were discovering spirituality outside of Judaism. A result of his work was the Jewish Renewal movement. Reb Zalman’s teachings incorporate wide-ranging knowledge of the spiritual technology developed by peoples all over the planet.

He is the author of Spiritual Intimacy, (1991); Paradigm Shift, (1993); Gate To The Heart, (1993) and with Ronald Miller, From Age-ing to Sage-ing, (1995), Wrapped in a Holy Flame (2004) and his latest book, Jewish with Feeling: A Guide to Meaningful Jewish Practice (2005). He also has a bibliography of over 150 articles and monographs on Jewish spiritual life and has translated many Hassidic and Kabbalistic texts.

Bibliography:
For information about the wide variety of Jewish views on what happens after death, see “Jewish Views of the Afterlife” by Simchah Paull Raphael and Jason Aronson. Raphael, a Reconstructionist rabbi, takes a historical approach to life-after-death theories, exploring the views that predominated in each era of Jewish history.